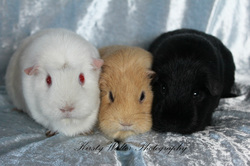 Bellissima, Zoet and Breaking Dawn.
My stud prefix, Tabella, was created by mixing letters around, inspired by my dog, Tinkerbelle.
Tabella Cavies, registered in late 2008, is a small stud, housing under 30 cavies, situated in Perth, Western Australia specializing in breeding and exhibiting quality cavies as close to the Australian National Cavy Council standard in Self White PE and Self Black.
Over a few years, I have had experience with Longhair in Merino, Texel, Sheltie, Coronet and Peruvian, Marked in Black Dalmatian, Crested Ticked in Silver Agouti and Gold/Lilac Argente, Coarsecoat in Rex and Abyssinian, English Crested in White PE, Cream PE, Cream DE and Black, Satin in White PE, Cream PE, Cream DE and Slate, and Self in Cream DE, Lilac and Slate.

I had been around animals since I was a young child - I had grandparents who bred horses, and at the age of roughly 5 years old, I acquired my first pony who I had much success with in the show ring. I started with cavies when I was a young child, however, 2008 was the year I discovered there was so much more to cavies than just a cute, cuddly pet.

I was wanting another pet, a pet other than a horse, and I decided to look into buying some guinea pigs. Little did I know, there was an actual club for showing guinea pigs, and I looked around for breeders. I acquired my first few cavies from a breeder in Western Australia by the name of Alida Hazelgrove (Suneagle Stud), who happened to live very close to me. It was there I fell in love with a Self White PE sow, Pixie, and a Coronet boar, Beau, who I both had much pleasure in owning these two lovely cavies. One of the breeds I had my heart set on was the Abyssinian, and I was fortunate enough to be given contact details to another breeder, Susan Pelleymounter (Kenmar Stud) who was only an hour or two away from my home. After a visit, I came home with a Red Roan Abyssinian sow, Rosie, a Brindle Abyssinian boar, Petey, and a Self White PE boar, Zeus.

I had decided I wanted to breed and show these marvellous animals, and I sent off a membership form for Cavy West Inc. and a stud registration form to the Australian National Cavy Council stud registrar. Upon approval of my stud name, I paired up Zeus and Pixie. In February 2009, Pixie gave birth to three handsome Self White PE boars and I attended the first show of 2009.

Tabella Cavies has had much success on the show table, both at the Club Shows in Western Australia, and the National Cavy Show in New South Wales. In 2009, I had the pleasure to breed a gorgeous Self Black sow, Double Champion Tabella Breaking Dawn who showed much potential as a young cavy, and fulfilled her promises, winning Best Cavy of the Year in 2010 and countless amounts of Best in Shows. In 2010, I bred a beautiful English Crested White PE sow, Triple Champion Tabella Bellissima, who also went on to win Best Cavy of the Year in 2011 and was awarded many Best in Shows. Related to Bellissima, in 2010 I bred a stunning Self Cream DE Sow, Champion Tabella Zoet, who won a Reserve in Show (Bellissima taking Best in Show) at one of the club shows!

2011 was a big year for Tabella! The decision was made to fly over to New South Wales to compete at the National Cavy Show - this was a huge step for me, and I couldn't believe it was happening! I had entered three of my most precious sows; Double Champion Tabella Breaking Dawn, Triple Champion Tabella Bellissima and Champion Tabella Zoet. I unfortunately had to scratch Dawn due to her having a hair loss problem, but my other two did very well, Zoe taking out Best Self Cream DE, and Belle taking out Reserve English Crested White PE!

And another successful year at the Australian National Cavy Show! In 2012, I had entered another three of my darling cavies, my Satin White PE boar, Tabella Citylight, my Satin Cream PE sow, Tabella Xahlia Ingrid and my Self Cream DE sow, Tabella Xandria Ivy. Ivy unfortunately didn't place as the Cream sows class was very large, but both of my Satins did very well! Ingrid taking out Best of Breed and Citylight taking out Reserve of Breed!

I'd love to mention and thank the magnificent breeders who supplied me with some outstanding stock, I wouldn't be where I am now without them!
Current Breeds:
Self Whites - Alida Hazelgrove (Suneagle Stud, WA), Susan Pelleymounter (Kenmar Stud, WA) and Valerie Howe (The Spinney Stud, QLD)
Self Blacks - Susan Pelleymounter (Kenmar Stud, WA), Ken and Liz Hart (Gnarojin Stud, WA) and Robert Brown (Dunvegan Stud, VIC)
Powered by